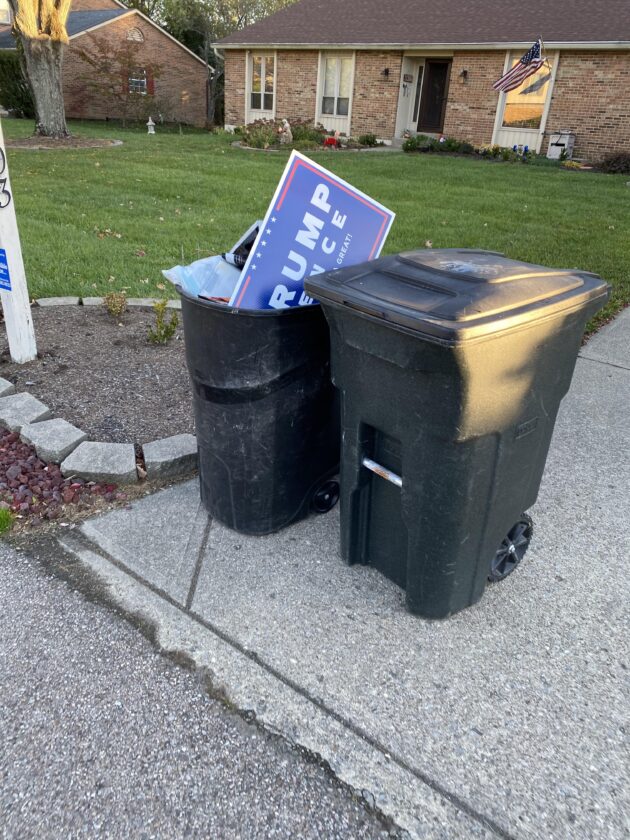 If there’s ever a chance the 25th Amendment is invoked, it’s gonna happen in the next 71 days. I’ve doubted Republicans and people of the Trump administration before when it comes to upholding Constitutional and American values before, but this time when the walls start caving in and the inevitable is going to happen and Trump still refuses to acknowledge a new president is going to be sworn in, they would rather spare the nation the embarrassment of literally throwing out a former president from the White House for trespassing.

Hell, I still find it amazing that people are still working for Trump at this moment with the crap he’s still pulling. I guess they value pride over any integrity. They will forever be associated with that tyrant. But, sadly, I’m sure they will all get high-paying jobs. Like this woman. She’s young and will forever be known as an enabler who lacked integrity when her country needed her most.

"Unless she has more details to back that up, I can't in good countenance continue showing you this." pic.twitter.com/cBd6ASlV8H

There was so much news last week that this story got looked over. A helicopter transporting a donor heart crashed on Friday on the helipad at Keck Hospital of USC. Rescuers were able to retrieve the heart, who then handed it to medical personnel, who then tripped and dropped the heart. Thankfully, the heart wasn’t damaged and stitched into the recipient two hours later, who will have an interesting story about how his heart survived a helicopter crash and then was dropped on the floor.

I’ve cued the video to start at the most important parts.

Well, since we’re on the topic of helicopters – Donald Trump’s Private Helicopter Worth over $1 Million up for Sale after Election Loss

Currently in storage at a hangar in New Jersey, the aircraft bears the Trump Organization’s distinctive color palette of black and red stripes and still carries the U.S. civil registration code N76DT in reference to its owner.

The listing, which appears via Aero Asset and Jet Edge Partners, does not give a price. However, according to a New York Times piece, the helicopter was valued at approximately $875,000 back in 2016.

After Trump’s election loss and the notoriety associated with his name, it is anticipated the aircraft has gained extra market value and could secure around $1.5 million, autoevolution suggests.

My favorite Trump helicopter story comes from Bill Gates, who was then the richest man in the world.

Gates said Trump had met his daughter Jennifer, 22, at an earlier event in Florida.

“He went up and talked to Jen and was being super nice,” Gates said. “And then like 20 minutes later he flew in on a helicopter to the same place. So clearly he had been driven away and wanted to make a grand entrance on a helicopter”

“So when I first talked to him it was actually kind of scary how much he knew about my daughter’s appearance,” Gates said, prompting groans from the crowd. “Melinda [Gates’ wife] did not like that too well.”

I wasn’t upset at President Trump accepting his party’s nomination at the White House. After all, it was during a pandemic. But, I was upset at the spectacle he made it, especially seeing his name appear in fireworks over the national mall.

But I will give credit where credit is due. It was the best fireworks display I can ever remember and pulled off perfectly. I thought there was no way it could be topped, and then Biden’s speech on Saturday happened and we got to see a pretty nifty lighted drone presentation spelling out his name and showing the outline of our nation. Even if it doesn’t top Trump’s fireworks, I see a lot of symbolism. The Biden spectacle not only had fireworks, a nod to the past, but it used new technology, a nod to the future.

The Biden-Harris fireworks/drone light show was out of this world. pic.twitter.com/H7JiBpm0pn

Only two things could have made that Biden spectacle better. First, the drones should have spelled out “MALARKEY”. Second, since Biden is a proud Irishman, U2 should have been played. I think it may have been avoided because U2’s City of Blinding Lights was Obama’s intro music at similar events, and the campaign wanted to make a clear distinction this is going to a Biden presidency, not a continuation of the Obama’s.

Why Did the World’s Fastest Man Miss Drug Tests— and a Shot at the Olympics? – Christian Coleman was poised for a major breakout at the Tokyo Games this summer, but he was suspended for two years for missing drug tests. How did that happen?

The color white has long been associated with the women’s suffrage movement, adopted as a symbol of moral purity alongside green for hope and purple for dignity. It also signaled their ethos of nonviolence, an olive branch to those threatened by their then-radical calls for political equality.

Harris’ pussy-bow blouse, too, carried historical weight. It evoked the power-dressing of Margaret Thatcher, who wore hers the way male colleagues wore ties, a fitting metaphor for how the UK’s former prime minister co-opted and remade the boys’ club rules of 1980s British politics.

The women of the Democratic Party have continuously used white in silent protest against a president whom they consider a threat to their rights. At Trump’s joint address to Congress in 2017, a group of female lawmakers synchronized their outfits to raise awareness for women’s issues, including reproductive rights and equal pay.

They did so again at successive State of the Union addresses, most recently in February this year, as lawmakers marked a century since the 19th Amendment gave women the right to vote (though women of color would face voting barriers for decades longer). The sight of Nancy Pelosi in all-white clapping sarcastically behind the President a year earlier, while a great block of white-clad congresswomen sat before him, will also live long in the memory. Harris was standing on all their shoulders, too.

The name of the type of blouse, in all honesty, makes me feel uncomfortable to say.

There’s a trend on Twitter of recording Trump supporters removing their lawn signs and Trump flags with Taps playing in the background. It cracks me up. But don’t worry, I know one day my preferred candidate will lose and people will take pleasure in our defeat. What goes around, comes around. It’s also one reason why I don’t but any of that stuff on my lawn or stickers on my vehicle.

Another coal plant to close in East Texas

The items currently for sale on the company’s website include stickers that play on Trump’s campaign slogans and patriotic hoodies and t-shirts with the company’s name and American flag on them. The hoodies are selling for $50, while the t-shirts have been priced at $25.

Woman demands free Chick-fil-A after claiming she is an FBI agent, gets arrested

Cancer sucks. Alex Trebek recently succumbed to it. But he got to live the last eight-teen or so months hearing how much he’s loved and what he’s meant to people. Too often, people never get to know how much they are loved or appreciated and it’s only revealed after they are dead. In that way, Trebek was a very lucky man.

Interestingly, Trebek and Sean Connery died just a little over a week of each other. Everyone loved the portrayal of them on SNL’s Celebrity Jeopardy sketch. I was curious if the two men ever crossed each other’s path. Nope. At least we know how Trebek felt about the sketch. I couldn’t find anything about Connery’s thoughts on the bit.

Back in 2017, Alex Trebek opened up about his feelings regarding Saturday Night Live’s sketch spoofing his mega-successful game show. Trebek told the New York Post, “It doesn’t bother me. If they’re spoofing you, poking fun at you or mentioning you it’s because you’re part of American pop culture, and that’s a good thing, I think.” That’s a great way of looking at it!

So, what about Sean Connery and Trebek’s real-life connection? Apparently the two never got the chance to cross paths. “I have never met Sean Connery,” but he was very familiar with their banter-filled SNL portrayal. Trebek then joked if he ever did get to meet Connery, he would “punch his lights out.”

Sean Connery made the most impressive entrance ever on a late night show. It happened when he visited David Letterman for the first time. I’ve cued the video below for you. What a good sport he was for doing that bit. His second Letterman visit was also rememberable. After he was introduced he walked up to Dave and kissed and hugged him (11:17 mark).