The primary reason I’m going sans beard right now is because I think it would increase my chances of getting COVID.

My commemorative U2 stamps from Ireland arrived in the mail this week, much faster than I expected.

Election wise, I have a feeling a variation of the following will happen, but I pray that it doesnt, and it’s all due to that damn Electoral College.

Republican state legislatures complain about voter irregularity claiming the results aren’t accurate and instruct their electors not vote on behalf of the popular vote but what they think properly reflects the results of their state. For example, Biden wins the popular vote in Texas, but the Texas legislature claims voter fraud and instructs their electors to vote for Trump (though some may opt not to follow suit).

How far off is this thought? Not as crazy as you’d think. Republicans control both legislative chambers in the six most key battleground states – Florida, Michigan, Pennsylvania, Wisconsin, Arizona, and North Carolina. Some electors might do what that Texas elector did last time and choose to vote against what the voters wanted. There could be just enough of them to make things unstable where neither candidate can get the required 270 votes to win.

If the above scenario happened, the election would then go to the U.S. House of Representatives and each state would get just one vote. Majority wins, so all that’s needed is 26 votes, which is the exact number of state delegations Republicans control. Currently, Republicans control 26 delegations to Democrats’ 22, with Pennsylvania tied and Michigan a 7-6 plurality for Democrats, with a 14th seat held by independent Justin Amash.

The tired and old cliche of “Democrats fall in love, while Republicans fall in line” may very well happen and we’ll be stuck with another four years of Trump. When it comes to playing hardball, Democrats are soft and Republicans are fiercely tough at playing politics. We saw that in the 2000 election and we see it with the Senate Majority Leader and President now.

They dreamed of esports glory. Then their bodies broke down  – Professional gaming is booming, with millions on offer for the best players. But esports is also taking a physical and mental toll – and some have decided that enough is enough

A handful of gamers Migliore has worked with directly have been left with constant pain. “Over time, you get these chronic micro traumas, these tears,” she explains, describing what can happen to human tissues after years of button-mashing. Then, a slight but sudden shock to that musculature, anything from pushing a heavy bag into a car boot or swinging a bowling ball can cause a bigger injury in the worn out tissue.

And while she hasn’t seen a displaced tendon like the one suffered by Bright among any of her own patients yet, she acknowledges that it’s something that could happen to a gamer. Esports athletes, she says, perform up to 600 actions per minute with their fingers while playing some games. But human hands evolved for climbing trees.

For those pushing for greatness, the toll on their bodies can be high. Esports insiders, including players and coaches, are increasingly worried about the pressures that competitive gamers face. Player health varies widely, with issues ranging from hand, neck and back pain that sometimes requires surgery, to poor nutrition, bouts of insomnia and mental health issues including anxiety, depression and burnout.

The folks that may cause any civil unrest have been stocking up on ammo fear years.

Walmart on Thursday said it has pulled guns and ammunition from the sales floors of its U.S. stores as it seeks to keep firearms from being stolen should social unrest erupt.

“We have seen some isolated civil unrest, and as we have done on several occasions over the last few years, we have moved our firearms and ammunition off the sales floor as a precaution for the safety of our associates and customers,” a Walmart spokesperson said in an email to CBS MoneyWatch. “These items do remain available for purchase by customers.”

Why did an Oregon health official dressed like a clown read off the coronavirus death toll?

A video in which Oregon Health Authority officials dressed in costume give COVID-19 information is getting national attention, almost two weeks after it was initially posted.

The reason? A screenshot of the video showing an official in sad clown makeup, reading of the daily virus death toll, tweeted by Oregonian/OregonLive reporter Samantha Swindler, was shared widely on social media.

Dr. Claire Poché, a public health physician with the Oregon Health Authority, kicked off the Halloween safety video by removing her surgical mask to reveal a full face of clown make-up, somewhat reminiscent of the Joker, one of Batman’s creepiest rivals.

“As of today, there have been 38,160 cases of COVID-19 in Oregon, with 390 new cases being reported today,” Poché said. “Sadly, we also reporting three deaths today, bringing the statewide total for COVID-19 related deaths to 608.”

The optics aren’t ideal, especially as Oregon, like many states, deals with surging coronavirus cases. 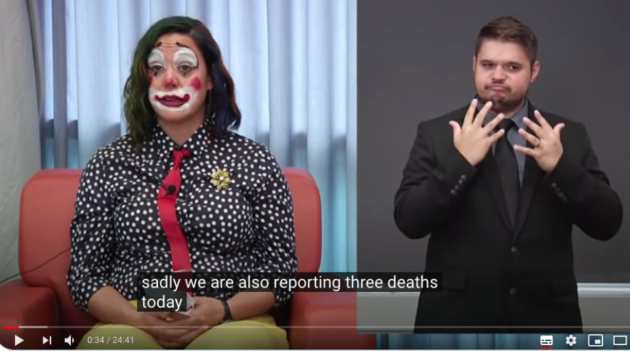 Folks in the Houston area were able to vote anytime of the day for a straight 24 hours. That’s pretty neat.

“Whether you’re a first responder who clocks in and out at 5 a.m., a medical professional working to save lives around the clock, someone keeping shelves full at grocery stores, or a shift worker keeping our port running, we want to give you the opportunity to cast your vote at a time that is convenient for you and four family,” Harris County Clerk Christopher Hollins said in a statement.

The 24-hour option is one of several innovations in Hollins’s ambitious $27 million election plan for this year; others include nearly tripling the number of early voting sites, drive-thru voting, sending mail ballot applications to all registered seniors and hiring more than 11,000 poll workers.

This is a long video for you to invest your time in, but it’s up my ally.