I put the wrong date up top. But I saw someone linked to this from another site, so if I update the title, the URL will be updated and the link will become broken. So, I’d rather admit to a mistake and avoid any broken links.

One thing I don’t think I’ll ever be on board with or would want to buy – an electric toothbrush. They seem too gimmicky.

I watched Drew Barrymore’s inaugural daytime talk show. It was exactly as you’d imagine it would be. It feels like Josie Grossie is all grown up and on her own. Her show uses technology in which the guest appears to be on set but is only there virtually. It was pulled off flawlessly. The guest even walks on stage and you can’t tell they really aren’t there. There are different kinds of brave. Her, not having any talk show or interviewing experience and starting a show during a pandemic without a studio audience, is a certain type of brave.

Here’s a tiny turtle scaling a wall. Too bad the GIF isn’t long enough for us to see the little fella complete his task.

It was worth the click just to see what the inside looked lie. Nothing grand, but I had an itch and it was scratched.

Netflix has a new documentary which is supposed to delve into the ‘human side’ of the Challenger disaster. Hey Netflix, please don’t. Shelve it. It’s 2020 and we are only 49 days away from the presidential election. We’re already dealing with a pandemic. The economy is in shambles because of its volatility. Everything is a mess right now. Literally, everything. Our pets’ heads are falling off. I’m sure the documentary is great. No doubt it’s going to pull at our heartstrings. But we can take only so much depressing things at a time.

Barry over at LiberallyLean pointed out this tweet from President Trump and voter fraud. It got me to thinking, if I were a North Carolina resident who voted by mail, how would I verify my ballot was accepted and counted? I found the answer with a simple Google search; they have a website for that, North Carolina Ballottrax. Out of curiosity, I thought I’d see if Texas has something similar. If we do, I couldn’t find in the roughly eight-minute time allowance I allowed myself. 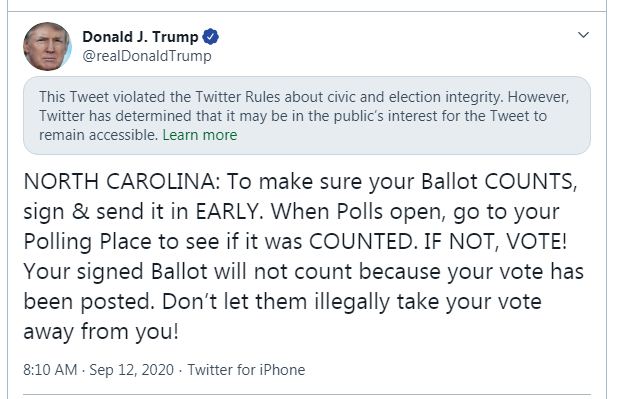 Speaking of Mr. Green, I saw him on CBS11 during what looked like an interview, though it could have been some sort of statement. The tone was much different this time than the last time I saw him interviewed on the news. I believe that was when the Wise County Courthouse had a crabs infestation and Laurie Behringer walked into his office.

Just one observation regarding what I saw. You could tell he was speaking to someone off-camera, but two or three times his eyes diverted to the camera. I was curious if he either felt he needed to speak to the camera or if there was someone behind the camera he was trying to communicate with.

Texas’s top agriculture official said during a visit to one of the state’s three licensed growers of low-THC medical marijuana last week that he supports expanding the current limited compassionate access program to include more patients who could benefit from cannabis—including those who would use it for toothaches.

“I would certainly expand medical marijuana. If it’ll help somebody, I’m for it. Whatever it is. I mean, a toothache, I don’t care. If it’s a cure, if it [alleviates] pain, we should be able to use that,” he said.

“I’m not a recreational marijuana, but if someone has a condition that this chemical will help, they should be able to use it,” Miller said.

Times, they are a changing – Vinyl record sales surpass CDs for the first time since the 1980s

States that have reopened bars experienced a doubling in the rate of coronavirus cases three weeks after the opening of doors, on average. The Post analysis — using data provided by SafeGraph, a company that aggregates cellphone location information — found a statistically significant national relationship between foot traffic to bars one week after they reopened and an increase in cases three weeks later.

Grandma has a strong sports opinion (1:07 mark). Actually, this news segment is full of them.