I’ve never seen Brian’s Song. It’s on that list of movies I’d like to watch but never made the effort.

There should be a law that if a federal holiday falls on a Thursday, declare the following Friday as another federal holiday. Maybe call it Citizens Day. A Reddit post which cited a similar Japanese law inspired this thought.

The New York town of Swastika votes to keep its name

A small town in upstate New York voted to keep the name Swastika, saying that the town founders named it after the Sanskrit word and not the hate symbol associated with Nazis.

President Trump’s campaign is discussing “contingency plans” that would involve bypassing the result of November’s election, reports The Atlantic.

The report delves into possible scenarios if Trump apparently loses the 2020 presidential election but doesn’t concede, noting that although we’re used to electors being selected based on the popular vote, “nothing in the Constitution says it has to be that way.” Citing Republican Party sources, The Atlantic says that Trump’s campaign is “discussing contingency plans to bypass election results and appoint loyal electors in battleground states where Republicans hold the legislative majority.”

The campaign would reportedly assert that this step was necessary due to claims of supposed voter fraud, which experts have noted is extraordinarily rare, ahead of the “safe harbor” deadline to appoint 538 electors on Dec. 8.

I’m surprised Hegar isn’t further behind, especially when you look at the cash on hand. She has only one commercial and I think it’s horrendous. I really know nothing about her other than she’s a Democrat. But if I were trying to know who she was just by her commercial, all I know is that she’s trying to she has a Purple Heart, and badly so with the poor special effects displaying her downed helicopter when she’s unflatteringly sitting on a mountainside. Cornyn has three commercials and none of them have shown any diversity, so he’s definitely not trying to reach out to any minorities. 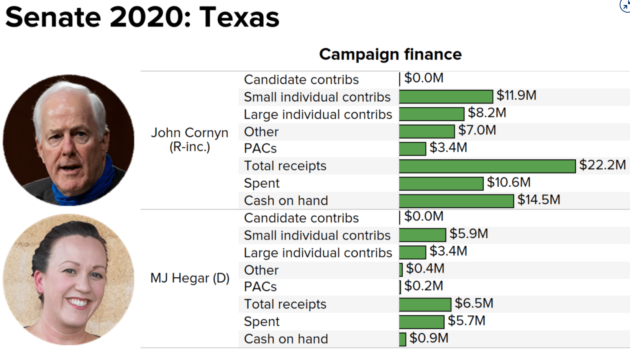 California to ban sale of new gas-powered vehicles by 2035

Don’t panic, nobody’s coming to take your car. As Newsom’s executive order outlining the new rules notes, existing internal combustion vehicles will still be perfectly legal to own, operate, buy, and sell within the state. The new rules only apply to new vehicle sales. That includes cars, minivans and SUVs.

The most notable and visually stunning stuff starts at the one-minute mark.

The original film has been upscaled, denioised, and frame interpolated using artificial intelligence. This film was already shot in color, so all that was attempted here is upscaling to 4K resolution and bumping the frame rate from 24fps to 48fps. Some scenes did not interpolate properly, but seeing it in a higher frame rate is pretty amazing.

Bodyguards go through intense training to be ready to protect celebrities, CEOs, and politicians. Security firm Global Threat Solutions has protected the likes of Joe Biden and Kamala Harris, and hosts trainings for new bodyguards trying to break into the field. Business Insider followed five new recruits on a three-day training in Long Island, NY. As they learn formations, how to plan for emergency scenarios, and how to scout out locations before every security detail, they get ready to put their lives on the line for VIP clients.