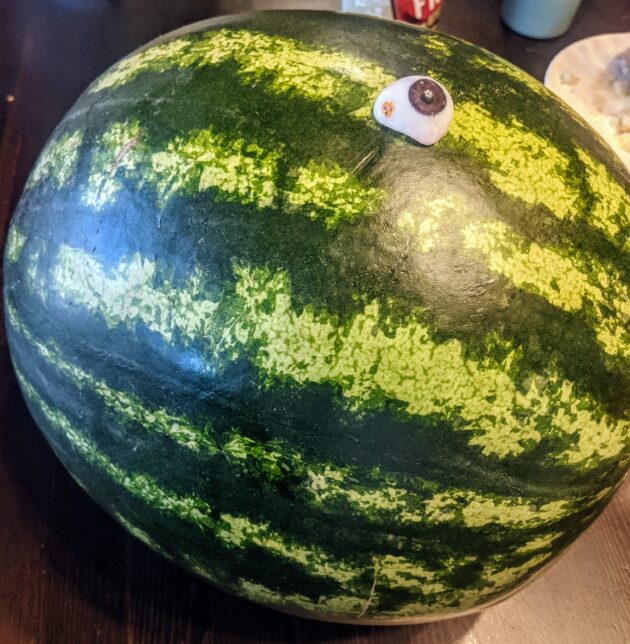 For reasons unknown to the whole family except for WifeGeeding, during the middle of supper, she decided to take out her prosthetic-eye and place it on top of the watermelon. We all thought it was pretty out of place but pretty funny. She finished dinner eye-less, which is probably something you can’t write about your wife. And yes, that’s a smiley face on it, it’s not visible when it’s in her ocular cavity. Usually, she has her initials in that place, but her ocularist opted for a smiley face last time.

I could do without ever seeing another Uber Eats commercial again. I hope to never hear Return of the Mack ever again.

I haven’t spent much time researching it, but I don’t think I’ve ever seen a photo of President Trump with his sleeves rolled up. He prefers to wear a polo type shirt in those type of situations.

This sentence took me a little while to process: An Alabama man who calls himself a witch has been charged with kidnapping the toddler son of a missing Georgia woman, the Sun-Sentinel reports.

This sentence also took me a little while to process: An Arkansas farmer disguised himself as a woman to sneak into a cemetery and deface the grave of his longtime nemesis with animal carcasses, police say

Yet another story which reminds me of The Simpsons episode in which homer stuck a crayon in his nose when he was a kid.

I wonder if Jaws is her favorite movie.

Berlin brothels reopen after lockdown, but no sex allowed

I’m reminded of a certain Wheel of Fortune segment on a South Park episode.

Budweiser wants to be Utah’s official state beer, suggests can with Delicate Arch and LDS temple

For a period of time starting in 2005, Apple allowed two US government contractors to work in its offices to develop a custom version of the iPod — but exactly what that iPod would do was a mystery, and remains so today, as shared in this fascinating story by former iPod engineer David Shayer that you should go read.

According to House of Brokers Realty, hidden away inside 203 E. Morrison is the former Howard County jailhouse, originally established in 1875. It’s equipped with nine cells, a booking room and a toilet.

“The cell door lock throws appear to be operational,” reads the ominous caption of the property listing.

America Has Two Feet. It’s About to Lose One of Them. – For decades, U.S. metrologists have juggled two conflicting measurements for the foot. Henceforth, only one shall rule.

How big is a foot? In the United States, that depends on which of the two official foot measurements you are talking about. If it comes as a surprise that there are two feet, how about this: One of those feet is about to go away.