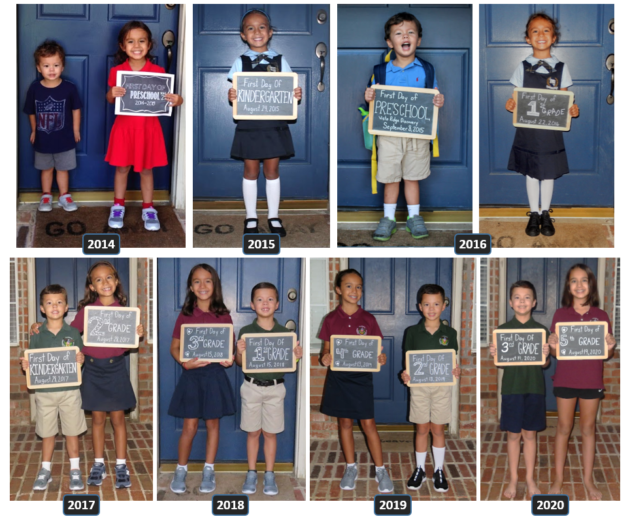 Yesterday was the first day of school for BoyGeeding and DaughterGeeding. Even for online learning, they have to abide by the dress code rules of at least wearing the top of their uniforms.

Last week I had to take the kids up to school for a meet the teacher event. It was a well-organized event with assigned meeting times. We arrived on time, in the middle of a 107° afternoon. Outside was the assistant headmaster controlling the flow of traffic of parents and students entering the building and keeping six feet apart. But I question the man’s sanity as he was wearing a sweater vest. I mean, I understand wearing a tie and being professional, but dude, it’s August in Texas and you are working outside. And get this, he’s from Canada, you’d think he’d melt like a popsicle.

Speaking of Popsicles, CBS Sunday Morning had a segment on the history of the frozen treat. It was invented by Frank Epperson who patented it in 1924. He called it ‘Ep-sicle’. ‘Ep’ for Epperson and ‘sicle’ because it looked like an icicle.

But his four-year-old son George came up with a catchier name: “He ran up and he put his arms around his father’s leg and he said, ‘Pop, pop, can I have a ‘sicle? I want a popsicle!'”

I thought the background used for Kamala Harris’ speech was pretty cool looking. And when she referenced poll workers, I turned to WifeGeeding and said, “Poll workers should not be confused with pole workers.”

It’s defined by a 2009 Urban Dictionary entry as “doomed by boredom.” But I think we can all agree that’s not our current fate. A more recent entry from March 30, 2020 (near the start of the coronavirus era) defines the term as “the intense feeling of boredom resulting from sheltering in place during an emergency.” Closer. But in my mind, boredoom is simply the state of feeling numb and restless while things around you seem hopeless. And if that doesn’t scream “2020,” then I don’t know what does.

The Guardian has an article about a study that found Facebook funneling readers towards COVID misinformation.

Researchers have demonstrated that they can make a working 3D-printed copy of a key just by listening to how the key sounds when inserted into a lock. And you don’t need a fancy mic — a smartphone or smart doorbell will do nicely if you can get it close enough to the lock.

The inventor will probably go on to create Skynet.

Robots can now store energy like humans in ‘fat reserves’ after battery breakthrough – Zinc batteries that integrate with robot’s structure ‘do double duty of storing charge and protecting the robot’s organs,’ researchers say

The perspective or scale of objects this video is interesting. These logs are huge, but they look like toothpicks and the humans look like ants.

Do not allow them to take away your power.