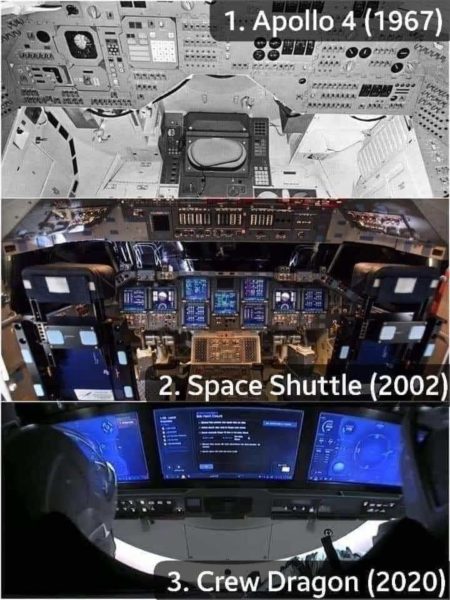 Yesterday, DaugterGeeding turned 10-years old. So, I decided to print out and gift a certificate to WifeGeeding honoring her for one full decade of parenting. 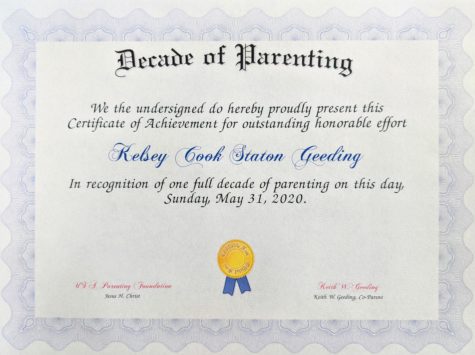 WifeGeeding did a great job of making the day special for DaughterGeeding. She threw her a surprise Zoom birthday party. Earlier this week, she delivered a basket of items to DaughterGeeding’s friends, and they used those items for a handful of “minute to win it” games. One of the items was a cake mix you could heat up in a mug in a microwave, so everyone got to eat some cake.

You may recall us starting some renovation work a while back, I think we started back in November of last year. 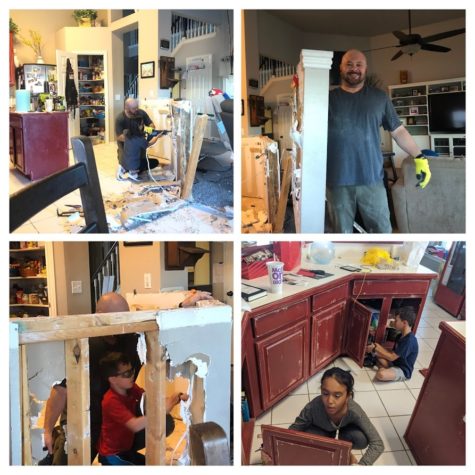 Were very close to finishing but still have some small work to do, which I’m sure you’ll be able to find in these before and after photos, such as some painting. While we did most of the demolition, we didn’t really do any of the handy work. If you are wondering about the top of our island, it’s made out of spalted maple and was created by a small but fantastic woodshop named Rustic + Modern located in Aubrey, TX.  We thought we’d do something different than the common marble or granite tabletop and leaned toward butcher block until we saw some live edge tabletops. It may be hard to see, but there’s an overhang at one corner, as opposed to either one or both of the sides of the width. Eventually, we’ll get some high chairs or stools to stick underneath them. 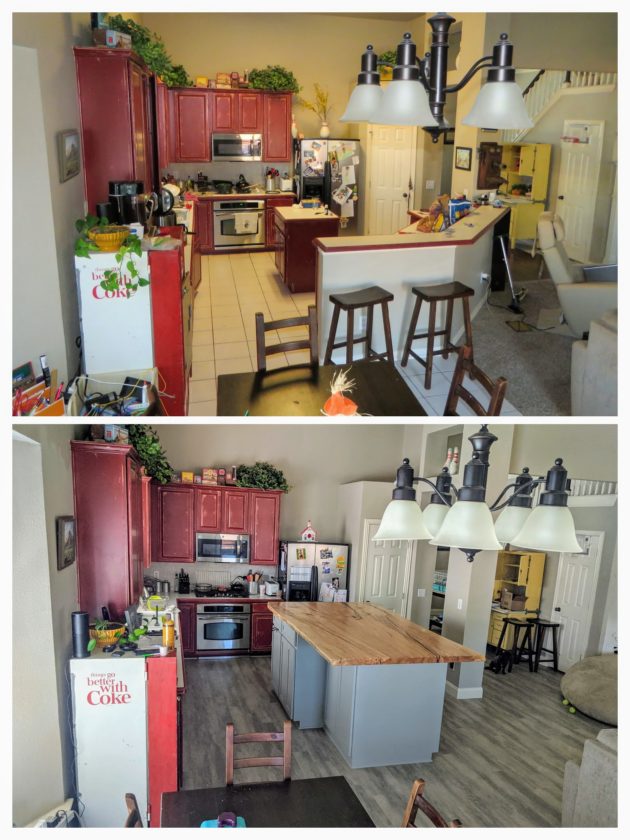 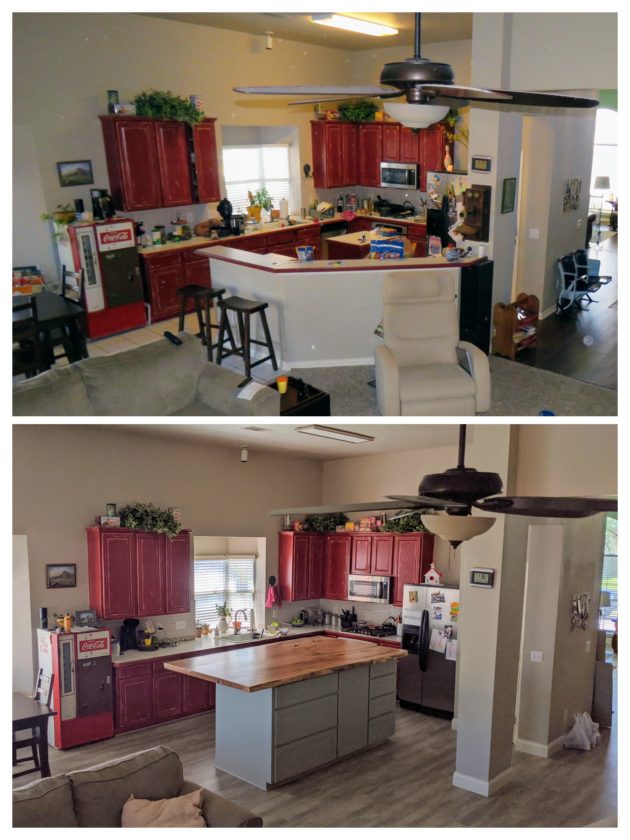 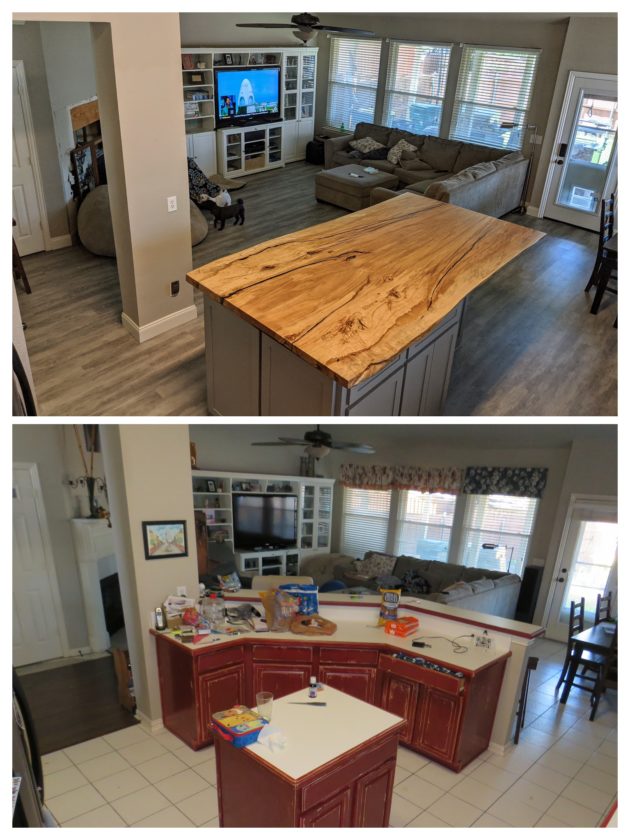 I’ll be honest, the first 20 times I saw this photo, I kept wondering why the cop had his hands in his pockets. It wasn’t until the 21st time that I was able to tell he was wearing black gloves and they were blending in with his dark pants. Of course, that doesn’t excuse his behavior, I’m just stating how my eyes deceived me. 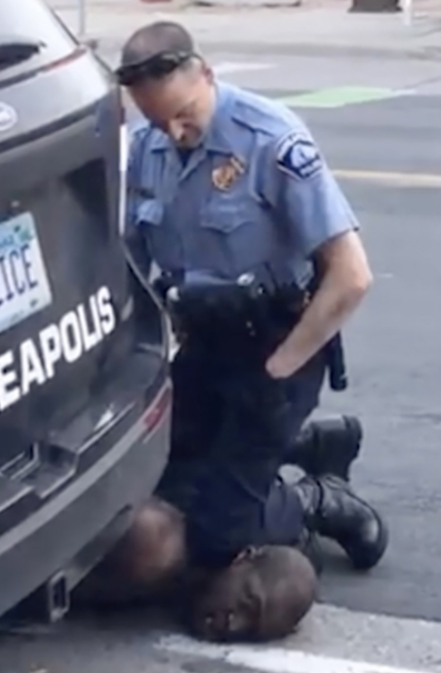 As I reflect on Elon Musk’s accomplishment of sending American astronauts to the International Space Station from American soil, I can’t help but think of one of the opening lines from the Hamilton song Yorktown (The World Turned Upside Down), “Immigrants, we get the job done.”

WifeGeeding’s nephew had his high school graduation ceremony on Friday. It was held outdoors at the football stadium. Graduates were seated six feet apart on the field and I don’t think anyone but immediate family could attend. It was streamed online, and WifeGeeding pointed out that all the special needs students were the first to receive their diploma. She couldn’t tell me if this is done every year or was don’t this particular year because of the accommodations made for COVID-19.

I asked her what his class rank was and she didn’t have any idea. That was a big deal to me, it was a personal goal to graduate within the top ten percent of my class. A few months ago I mentioned my graduating class was under a hundred and someone pointed out I was probably wrong about that, and I have to agree. I think my class size was 183 or 187. My father had a heart attack three days before the graduation ceremony so he couldn’t attend since he was hospitalized. My closest friends were nice enough, upon my request, to visit him in the hospital in their graduation attire before the ceremony. 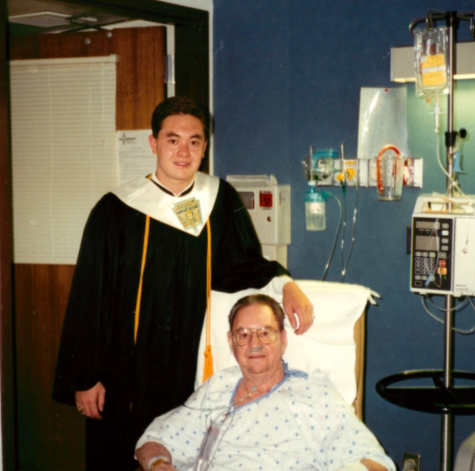