This has happened to me way more than I’d like to admit. I’ll receive an invitation to a meet or event from my work email and I’ll forward it to my personal email so I can put it on my personal calendar. I’ll soon notice that I just received a new email and check it only to forget I was the one who sent it.

While Small Operations Struggle, Chains Land PPP Loans – The Relief Funds Have Flowed To Operations Such As Ruth’s Chris And Potbelly.

While mom-and-pops struggle to get a loan through the Payroll Protection Program (PPP), a number of sizable restaurant chains are cashing multimillion-dollar checks from the relief initiative, a cornerstone of federal efforts to help small businesses through the COVID-19 crisis.

The parent of the Ruth’s Chris steakhouse chain collected $20 million by applying through each of two subsidiaries. Taco Cabana qualified for a $10 million loan, and Potbelly Sandwich Shop landed a $10 million loan, the largest advance permitted per applicant under the PPP.

The approach taken by Ruth’s Chris’ parent—having subsidiaries each seek a loan—is likely to be followed by other big restaurant companies, according to Stifel, a brokerage and investment banker. It aired the possibility in a communication to clients that Chili’s Grill & Bar parent Brinker International might take that route to secure $100 million in PPP loans.

I love this idea, one big national commencement address, but I’d extend it to include all current and former presidents. If I were advising the current president, I’d have him out in front of this and issue a press release that understanding this unprecedented even, the president would like to speak to all upcoming high school and college graduates.

Hi @BarackObama! Like most high school/college seniors, I’m saddened by the loss of milestone events, prom & graduation. In an unprecedented time, it would give us great comfort to hear your voice. We ask you to consider giving a national commencement speech to the class of 2020.

I also appreciated his response to this one reply. 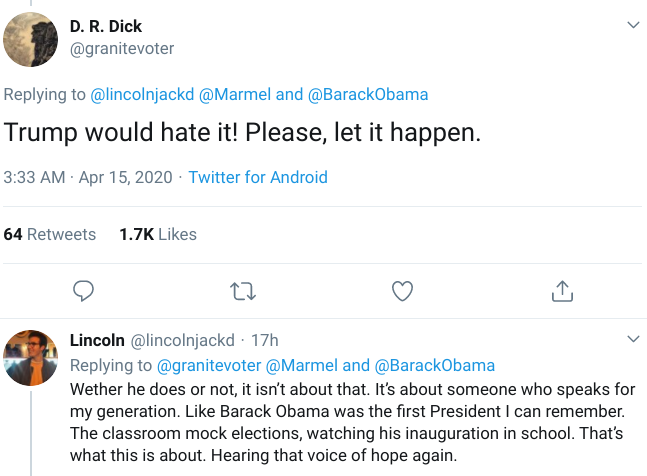 That article is about a week old, but it made me feel better about having that check I received from the Trump support go straight to the North Texas Food Bank.

Explosion at the Verso Mill in Jay, Maine on Wednesday, April 15, 2020

Spring Breakers Viciously Defend Themselves Online After COVID-19 Outbreak – After 44 spring breakers from the University of Texas tested positive, angry students (and at least one parent) ignited a backlash involving legal threats and a lecture from Matthew McConaughey.

Time to vent about some disappointment.

As many of you know, I have the privilege of serving as one of six trustees of a $2,500 memorial scholarship set up by the mother of my friend who was to be the best man at my wedding. He died a week prior to our wedding. When I say “our wedding”, I’m referring to the ceremony of matrimony between me and WifeGeeding, not me and five dudes I went to college with. Each spring, we get together to select a recipient from a graduating senior of the high school he graduated from and the school district he was employed by at the time of his death.

For the past 15-years, we’ve awarded a scholarship. However, we won’t be this year. Not because of COVID-19, but because not one single graduating senior took the time to apply. I could give them the benefit of the doubt that things are chaotic, but there was ample time to apply before this COVID-19 crisis started.

In an attempt to make some lemonade out of these lemons, we’re considering making a donation to a local cause or something benefiting the senior class. While looking up contact information for the school counselors I saw they maintain their own blog. One it, they have a list of scholarships, two actually. One is a junior achievement scholarship and the other is a memorial scholarship. Count me as disappointed that our scholarship isn’t listed, we’ve only awarded 15 straight scholarships to a graduating senior of their high school in honor of a former employee and graduate. I haven’t and don’t on mentioning my disappointment to them, I’d rather be passive-aggressive about it and vent on my blog.

A counselor and the vice-principal did respond to my email about a local organization we could donate to. I researched the organization and saw that it awards scholarships to graduating seniors and was set up about five years ago. To my surprise, when I looked at their criteria and application process, it’s almost identical to what we used for the first 13 years of our scholarship, even the wording is eerily similar. I’m not upset by this, I just thought it was a little peculiar and found humor in it all. We revamped our application process and modified the criteria two years ago so that the applicant can submit via the website. One reason we changed it is because we bickered each year over the wording of what we were asking from the applicants, so I’m left to wonder if this organization is experiencing any of the frustration we had.