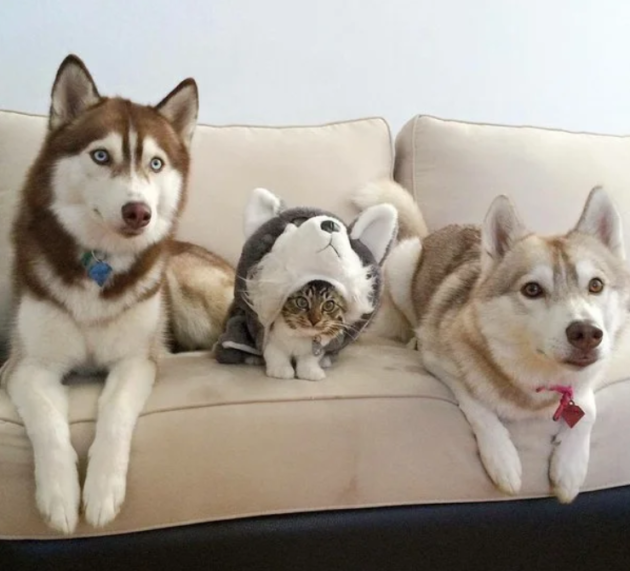 I recently engaged in an electronic mail conversation with a person with the last name of Aarzoo. It made me think of how R2-D2 is often referred to as Artoo, which you’ll see in closed captioning, comics, and the books.

Students at Olin College held a ‘fauxmencement’ ceremony with garbage bags gowns, paper ‘origami’ caps and tassels made of yarn

I love how they took the lemons they were given and made some lemonade. I bet secretly, a lot of families were happy they didn’t have to sit through a graduation ceremony. Let’s face it, most of them are pretty boring despite the accomplishment, it’s hard for graduates to spot loved ones in the crowd, and graduates prefer gifts rather than your attendance. I’m sure I’m not the only one who only showed up at the end and pretended I was there for the whole ceremony.

We’re getting new floors this week and right now almost all our furniture is moved out. I tried to make the most of it by playing wiffleball with the kids in the vacant living room and kitchen area.

A lot of shelves at our local grocery market were pretty bare to no surprise. WifeGeeding and the kids are visiting her parents in the small town of Lindale. She went to their local grocery store to pick up some sugar. The store was sold out of sugar but no other shelves seemed bare.

We ate at Cotton Patch on Friday and I was impressed with how they were handling the spreading of germs. All salt, pepper, and other condiments were removed from all tables and you had to request them, and they cleaned them as soon as they were removed. I noticed all the menus were being scrubbed vigorously. It was basically the same thing at Jason’s Deli. However, when I dined with a friend at 54th Street, it seemed they weren’t taking any precautions.

The president must be going nuts not being able to speak at any rallies in the foreseeable future. It made me think of parenting and grounding or punishing kids by taking away the thing they loved most. It’s unique for each child. Some kids feel like they can’t live without television, their tablet, video games, or playing with their friends. For the president, that one thing has to be speaking in front of large crowds. But then again, Twitter would rank pretty high up there as well.

I went paint supply shopping at Home Depot and Sherwin Williams. I noticed all the paint masks and respirators were sold out at Home Depot and heard several customers ask for them. But I was surprised to see my local Sherwin Williams had a large supply of them. That actually made me happy, painters aren’t stopping painting, and they need those for their job to protect their lungs.

Very nice of the mouse.

There’s some major drama going on at my alma mater. Hardin-Simmons has been going through some financial challenges and hired a new university president who was considered to be very skilled with the finances. The school has recently laid off staff, eliminated several majors and schools, and most surprising to me, closed down their seminary (you can still get degrees in Bible and theology at their school of theology, but the seminary has closed). They’ve been sending a lot of communication out about these decisions. On one hand, it appeared as they were trying to be transparent, but at the same time, it had a hint of propaganda, which I guess it was. It’s been reported that 64% of the faculty and 550 alumni have declared “no confidence” in the university president and the board. The family of the president of the university when the school’s name was changed from Simmons to Hardin-Simmons (serving as president for 31-years) is now requesting that their family name not only be removed from all buildings but that the body of the former president, who is buried on campus, be relocated. You can read the family’s letter in this article. The family is also pledging to financially help with any family or student with legal matters.

In a letter to the HSU Board of Directors, Jeff Sandefer says he, his father’s widow, and his sister would like to have their family name removed from all buildings and would like to relocate his great-grandfather’s remains to “a more suitable resting place.”

Sandefer says he believes HSU is “headed for financial and spiritual bankruptcy” as a result of “poor leadership, unwise financial decisions and a disregard for HSU faculty, students and alumni” the letter states.

In the letter, Sandefer says his great-grandfather, Prexy Sandefer, would be proud of the faculty and students, “he would be embarrassed by its low graduation rates, abysmal starting salaries for graduates and acceptance of almost any student, as long as he or she is able to qualify for a student loan.”

Finally, Sandefer says he pledges financial support “for legal actions by any member of the HSU community who has been or will be wronged or wishes to contact regulators or accreditors with their concerns.”

I’m only going to get involved if they dig up the former mascot.

Here’s the Captain America’s stunt double doing the signature backflip. I’m impressed, I thought it was done with cables and edited out.