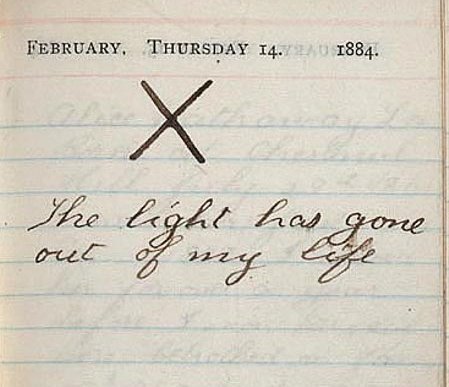 That image above is from Theodore Roosevelt’s diary, he had a tough day.

On Valentine’s Day of 1884, just 36 hours after the birth of their only daughter, Alice, 25-year-old future U.S. President Theodore Roosevelt held his young wife in his arms as she passed away from undiagnosed Bright’s disease. Incredibly, just hours before, in the same house, he had already said a final goodbye to his mother, Martha. She had succumbed to Typhoid, aged just 48.

Yesterday, DaughterGeeding printed and distributed the third edition of her class newspaper. Her classmates like it so much they are now giving her random sums of money. How much? I didn’t ask. Another classmate asked if she would put something in the paper about his upcoming birthday party and would pay her to do it. The kid is an entrepreneur.

Seeing the shockwave reverberate back and forth is cool, but I bet it felt neat as it rushed through the air.

Too bad Harold Taft isn’t around, he coudl tell us stories about how he got around using that word. – Until 1950, U.S. Weathermen Were Forbidden From Talking About Tornados

I think President Trump, from a political standpoint, has positioned himself well. I’m not sure it was all planned, but he’s in a good spot. If he breaks the law egregiously, the Democrats wouldn’t dare try to impeach him again. Doing so would further the Republican message that Democrats are unwilling to accept the results of the 2016 election and make them look like obstructionists. The country has already been down that road and doesn’t want another ride.

I also read that Hope Hicks will be returning to the White House. I’ve been reading the book A Very Stable Genious and she comes off well. While she’s young and extremely attractive, she’s a lot smarter and calculating than anyone would expect and she’s got the respect of all the Trump family. Don’t underestimate her. She may not be in the spotlight, but she’s really the only person capable of “handling” the president.

Armchair Political Consultant Thought – Mike Bloomberg should hire writers from The Daily Show to come up with funny and snarky tweets about current events. The current president has mastered the art of attention-getting tweets, Bloomberg should tread on that turf.

Right after I wrote that I found the following articles

– Michael Bloomberg’s Campaign Suddenly Drops Memes Everywhere – A campaign of sponsored content for the candidate flourished suddenly on Instagram. A new outfit, called Meme 2020, is behind it.

Meet the Investor Who Bet Early on Warby Parker, Glossier, and Dollar Shave Club – While most VCs were focused on software, Kirsten Green at Forerunner Ventures saw the potential of the direct-to-consumer revolution

While pushing some large and heavy furniture yesterday, I heard my bottom left rib pop really loud. It was odd, nothing was pressed against it, it just popped as I was straining. I never had anything like this happen. It was one of those pains that you know something is really wrong but you can’t yet feel the pain and the gravity of the situation hasn’t registered. I laid flat down on my back and didn’t feel a sharp pain but a really dull and deep kind of pain, similar to a pulled muscle. The rib area is still sore and my mobility is only slightly compensated. It was just weird experiencing something I never felt before physically, I thought I was passed that point in life.

6 Responses to Bag of Randomness for Valentine’s Day 2020