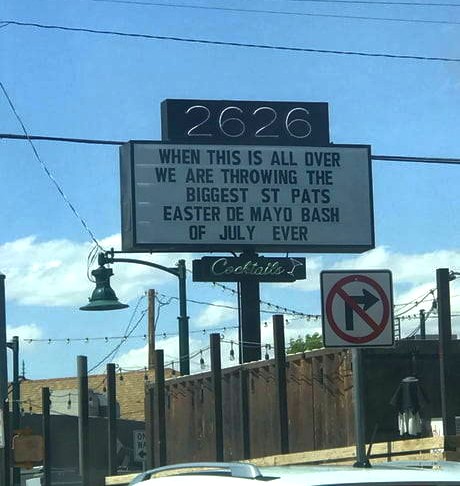 I love how Better Call Saul is a slow burn. It’s a great way to wind down a Monday.

My place of employment is having a Bring Your Child to Work Day via Zoom this Wednesday. They will be making a craft and will be asked to provide their name, age, hobbies they enjoy, and describe what your parent’s job. Gulp.

The staff at a doctor’s office will often annoy me as I feel a lot are condescending and cathartically enjoy the power trip. I have an appointment tomorrow and was asked to bring in a 16-month-old MRI scan which is on a DVD, but that isn’t possible since the appointment changed from being on location to the phone. The office worker, in a matter of fact kinda tone, told me to fax it.

Are doctor office staff members also considered to be heroes? Should they be included in my thoughts when I see a white ribbon tied to a tree?

We compared top Google searches during the same weeks in 2019 and 2020 to see what has and hasn’t changed.

Most common Google searches beginning with “how to” from April 5 to 11. 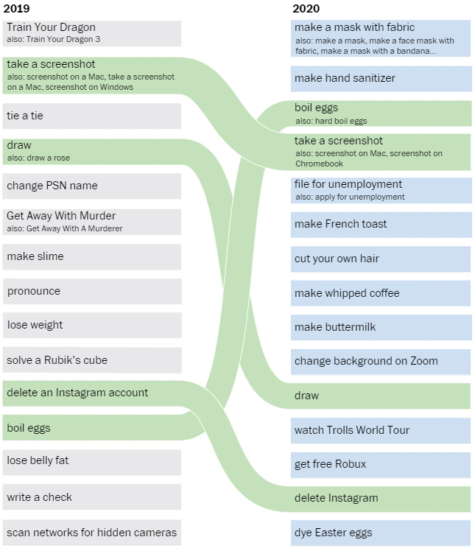 Yesterday I wrote about the challenge it must be to unseat an incumbent. I find it funny I didn’t even consider the presidential election when it came to mind. I was thinking like Senate, House, and statewide office elections. Compare MJ Hegar to Beto’s run against Cruz two years ago. Beto was able to travel county to country and meet and greet a lot of Texans – selfies, rallies, door-to-door, etc. At this point in his campaign he was well known to many Texans. Compare it to Hegar, and I doubt many Texans can tell you the name of Cornyn’s opponent. The challenge of getting coverage over anything COVID-19 is tremendous.

George Packer, Staff writer for The Atlantic – We Are Living in a Failed State – The coronavirus didn’t break America. It revealed what was already broken.

Note not sure why, but this one sentence, which isn’t profound, stopped me down and had me pondering for a while, “This is the third major crisis of the short 21st century.”

How could he be so blind to everything on the right? https://t.co/KL2nTlxFaz

In Peter King’s Monday column, he linked to a Boston Globe article which is behind a paywall.  It’s about what the future of arena and stadium crowds will look like.

Decontamination of stands will have to become a staple of stadium operations. Hand sanitizer will become omnipresent in concourses. Cleaning staffs would have to be vigilant about the “high-touch” areas of facilities — including railings (both in stands and on escalators) and elevator buttons. Might there be a requirement for spectators to wear masks? If so, masks with team logos might replace caps or jerseys as the most frequently seen form of team apparel. With diminished crowds, it’s possible some of the standard issues at sporting events of overcrowded restrooms would be resolved. Still, teams might restrict the number of people in a restroom at any given time.

It’s a quintessential part of the stadium experience: A hot dog passed from vendor to fan to fan to fan, with cash flowing back in the other direction. In all likelihood, that familiar ritual will be gone. “They’ll have to have no stadium vendors,” said [Smith College economics professor Andrew] Zimbalist. “They’re not going to have people passing hot dogs down or passing anything down. That has to stop.”

Enormous bottlenecks form after games as people try to rush home, which could create considerable stresses on the public health infrastructure — not only for the sports venue, but also for surrounding neighborhoods and public transportation systems. It’s possible those bottlenecks would be resolved by a diminished number of fans attending events, as well as by self-policing habits. Facilities might also need to control the pace of departures from each zone of the park.

Tom Brady was thrown out of park by a Tampa recreation worker – Mayor Jane Castor says the Bucs quarterback was working out in a closed park.

Netflix adds a ‘screen lock’ feature to prevent accidental pauses – It can be frustrating to accidentally tap a button and mess up playback when watching Netflix on your phone. Thankfully, Netflix is rolling out a new feature for Android devices that tries to prevent that.

A Woman’s Breast Implants Saved Her Life From a Gunshot, Doctors Say – Doctors say a woman’s silicone breast implants deflected what could have been a fatal bullet, stopping it from reaching her heart. Amazingly, this is not the first time such a thing has been reported in the medical literature.

Wow. I’m what you call a little slow. Not until now have I put together that Wayne Knight, “Newman” in Seinfeld, was in JFK. I watched the movie before watching the “Second Spitter” episode, never watching it again, and never put together he was in Oliver Stone’s JFK. Now, I see why it’s iconically funny.